You need to be hungry when you make this and have other people around to help you eat it up, because you won’t be able to stop eating it, it’s so good! I saw a recipe on Pinterest for a Stuffed Bread Loaf and decided to try it out. I modified the recipe because I think my bread loaf was much bigger…I bought one of those large round sourdough loaves (1 lb. 8 ounces). I sliced my bread a little thinner, too (thinner slices equal more cheese per bite 🙂 ), and I used more olive oil and cheese than the original recipe. I also used roasted chicken (sliced deli-thin) instead of ham.

You can use mozzarella or provolone cheese in this…I used some of each. Instead of roasted chicken, you can use sliced ham, turkey, or salami…whatever you like best. I like using the really thin, thin deli sliced meats in this because it makes stuffing the loaf a little easier. Slices of roasted red peppers are stuffed in this amazing loaf, too…and if you have any more room to stuff, the original recipe mentions you can also use sliced or chopped olives, chopped marinated artichokes, sun-dried tomatoes…even pesto…yum! Sliced mushrooms would be good, too. I’m going to try this with chopped artichokes the next time I make it!

You start with a round loaf of sourdough, but by the time you’re done stuffing it, it actually takes on an oval shape. This is a great appetizer for get-togethers, parties, and game-watching…or a yummy snack for you and your family or friends. It’s so good right out of the oven! If it cools before you have time to serve it, just pop it in the microwave to reheat! You will need a pastry brush to brush an olive oil mixture on the bread slices…so be sure you have one before you start…

Preheat oven to 350 degrees. Line a baking sheet with parchment paper and place your loaf on the sheet.

Slice your round loaf of bread vertically into 3/4″ to 1″ thick slices–but do not slice all the way through to the bottom! (You should end up with about 10 or 11 “slices,” giving you 9 or 10 “slits” to stuff with cheese, meat, and roasted peppers).

In assembly-line fashion, make 14 “piles” with each slice of cheese, topped with a thin slice of deli meat, then topped with a roasted red pepper slice or two (you could also add or substitute some chopped olives, artichokes, sun-dried tomatoes, sliced mushrooms, etc. with or in place of the red pepper).

Bend each cheese slice “pile” as if you were going to fold it in half, and fit down in between your bread slices. Because several of the end slices are narrower, one “pile” is enough to fill them up. The wider middle slices will require two “piles” stuffed in between them. For the other slices, I stuffed one-and-a-half of the cheese “piles” in between them. If this sounds confusing, all you really need to remember is to stuff the bread slices with your piles of cheese and other goodies till your loaf is well-stuffed!

Bake your stuffed loaf on the baking sheet at 350 degrees for 20 minutes or until cheese is melted. Remove from oven, and serve while warm! You can just pull the slices apart as you’re eating it, or cut them with a knife.

It’s so yummy and cheesy…I’m going to have to make another loaf soon! 🙂

For roasted red pepper fans: Roasted Red Pepper Hummus can be used as a healthy spread on pita bread or as a dip with raw veggies, crackers, or chips! Love that roasted red pepper flavor!
This Hot Cheese and Bacon Dip is baked up in a bread bowl and served with chips, crackers, or veggies! It makes a yummy snack for game-watching or anytime you’re wanting something good and cheesy!😊🧀
Lentil Soup with Bacon is sure to warm you up on a cold day! Hope you are all staying warm and safe!❄️❄️❄️
Cranberries and chocolate are a great dessert combination! These Chocolate Chip Cranberry Nut Bars make a tasty winter treat with some hot cocoa on a cold day!😊
It’s been snowing all day today—
This hearty quick bread has mashed bananas to make it moist, dried cranberries to add sweetness, and some bran cereal to add some fiber! Have this Cranberry Banana Bran Bread for breakfast or a snack with some coffee or tea!
This Heirloom Tomato Soup is delicious and made with lots of healthy ingredients. It makes a great meal on a chilly day!
Cheesy Cornbread Muffins with Bacon…for breakfast, for game-day watching, for snacking, and for lunch or dinner with a hot bowl of soup or chili!😊
Salted Dark Chocolate Coffee Bark is a treat for dark chocolate and coffee lovers! The recipe is so easy and it makes a great food gift too!😊
A new cookbook, Crazy Sweet Creations by Ann Reardon—@howtocookthat—is filled with tips on how to create eye-catching cakes, cupcakes, tarts, pastries, ice cream desserts, and more! Read more about it in my review below.
Dark Chocolate Cranberry Blondies make a nice sweet treat! They’re thick, chewy, and filled with dried cranberries, dark chocolate chips, and chopped pecans!
These 3-Ingredient Pumpkin Spice Mini Bundts may just be the easiest mini bundts you ever make!😊 And they taste so yummy! 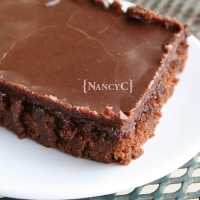 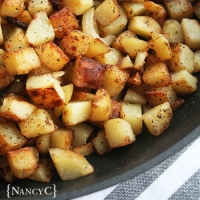 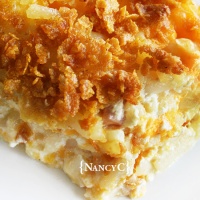 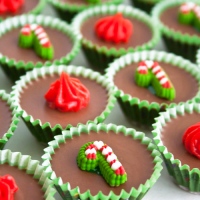 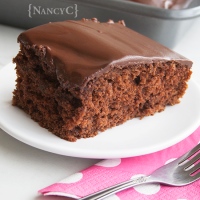 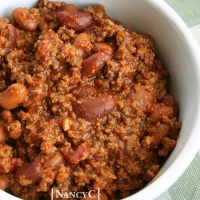 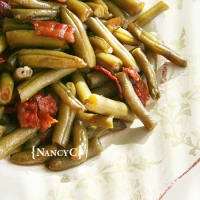 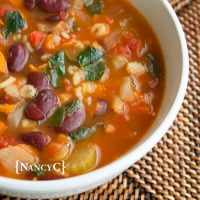